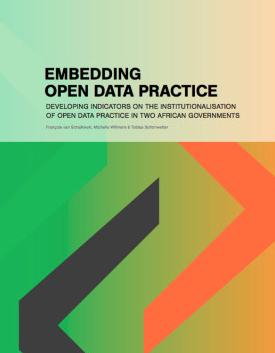 Between December 2014 and August 2015, members of the IP Unit executed a research project on Open Data in Developing Countries. The World Wide Web Foundation-funded project was part of the Emerging Impacts of Open Data in Developing Countries Phase 2 project, and was titled “Embedding Open Data Practice: Developing indicators on the institutionalisation of open data practice in two African governments”. The final report is now available. The key motivation for conducting the research was that insufficient attention has been paid to the institutional dynamics within governments and how these may be impeding open data practice. In order to address the question of whether open data practice is being embedded, the project undertook a comparison of government open data in South Africa and Kenya.

In developing open data indicators to measure how embedded open data practice is, the research team chose to focus on open licensing because they considered it to be a key indicator of openness. The act of assigning an open licence not only indicates an understanding of what constitutes open data, but it also indicates that organisational actors have come to terms with and accepted the consequences of data being reused without restriction. The research did not restrict its investigation to high-level commitments or policies but examined aspects of licensing at multiple levels of government. Project findings suggest that there is a complex interplay (and, at times, conflict) between the various organisational levels of government. There are clearly still tensions to resolve in terms of reconciling the multiplicity of values and norms across the organisational levels that make up governments.