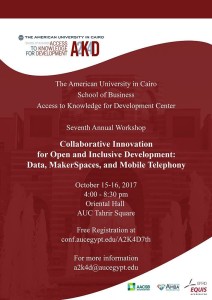 On 15 and 16 October 2017, the Access to Knowledge for Development Center (A2K4D) at the American University in Cairo held its annual workshop. The Center is the North African hub of the Open African Innovation Research (Open AIR) project. This year’s workshop explored collaborative innovation for open and inclusive development with particular focus on data, maker spaces, and mobile telephony. The event brought together researchers from around the world, including several Open AIR New and Emerging Researchers Group (NERG) members. The workshop was preceded by site visits at two local Fab Labs: Fab Lab New Cairo (FLiNC) and Fab Lab Egypt. These visits highlighted some notable differences between South African Fab Labs on the one hand and Fab Labs in Egypt on the other. For instance, the Egyptian Labs are largely independent and operate without any government support, while most South African Fab Labs are either government or institution based.

On day two of the workshop, Bram Van Wiele, a UCT PhD candidate and researcher in the IP Unit participated – together with Open AIR NERG members Victor Nzomo (Strathmore) and Mohamed Galaleldin (uOttawa) as well as Tania Bryant from the I MAKE foundation in South Africa –  in a panel addressing the seminal role of maker spaces in generating employment and promoting entrepreneurship and innovation in Africa. Bram presented on initial findings of one of Open AIR’s current case studies: “3D Printing: Enabler of Social Entrepreneurship in Africa? The Role of Low Cost Printers and Fab Labs”. During the subsequent panel discussion, the panellist shared experiences from their research on how makerspaces can become sustainable and inclusive environments that contribute to business generation.

Other issues discussed at the A2K4D workshop included the role of knowledge in our societies (and the role of mobile devices concerning current struggles over access to information, internet governance and privacy as well as a source of economic opportunities and possibilities) and open data for development in the Middle East and North Africa, with specific focus on data and digital technologies in the field of renewable energy and urban mobility.