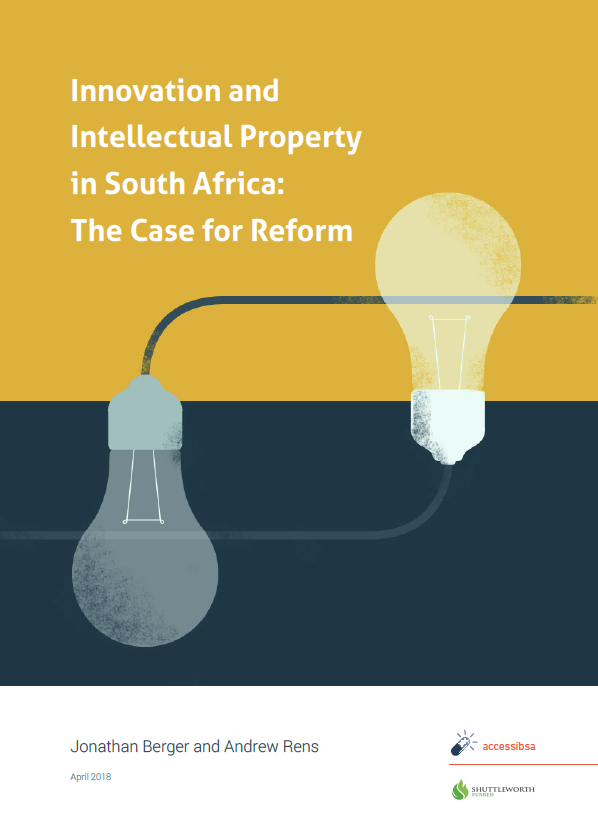 As we await the finalisation of South Africa’s IP Policy Phase I (the 2017 draft is available here), the IP Unit’s latest publication ‘Innovation and Intellectual Property in South Africa: The Case for Reform’ seeks to contribute to the debate about the introduction of a substantive patent examination system in the country by providing some much-needed empirical evidence. To date, a comprehensive analysis of who patents what in SA is simply missing

For their report, the authors Dr. Andrew Rens and Jonathan Berger analysed more than 4,000 patents granted by the dti’s Companies and Intellectual Property Commission to South African individuals and bodies over the period January 2005 to July 2015, about 10% of those granted domestically to South African individuals and bodies. They show that currently, the South African patent landscape is characterised by easy grants of patents of dubious quality and value. According to the authors, their data strongly suggest that the existing deposit system in South Africa stifles rather than stimulates innovation – contrary to the argument of those defending the current system that our soft regulatory touch stimulates innovation and any departure from it would kill innovation. Thus, the introduction of a substantive examination system for patents, as proposed by the dti, is to be welcomed. It is worth noting that numerous countries and regions already have substantive patent examination systems in place, including the U.S., Europe, Brazil, India, China and Kenya.

The authors of the report have summarised some of their key findings as outlined above in a Business Day newspaper article published on 7 May 2018, and Jonathan Berger also shared the report’s findings in a Cape Talk Radio interview. The underlying data is available here. Their latest report is part of a series of arguments from AccessIBSA: Innovation & Access to Medicines in India, Brazil & South Africa, a project supported by the Shuttleworth Foundation. A previous report in this series, co-authored by Nobel Prize winner and former Chief Economist of the World Bank Professor Joseph E. Stiglitz, entitled ‘Innovation, Intellectual Property and Development: A Better Set of Approaches for the 21st Century’, was published in July 2017. The IP Unit submitted its comments to the 2017 Draft IP Policy Phase I here.
Among the report’s key findings are: The single largest category of local patentees is made up of individuals, accounting for 44.8%. This is closely followed by companies, with 39.5%. The remaining patentees are universities (6.1%) and research organisations such as the Council for Scientific and Industrial Research (CSIR) and Mintek (1.6%).Yet despite accounting for less than 8% of all patentees, universities and research organisations are responsible for the lion’s share of potentially higher-quality patents, as evidenced by corresponding patent grants outside South Africa, a sign of confidence in the value of the innovation. Only 9% of the patents had an identified woman inventor. The highest rate for women inventors was among the university patentees at 41%. Only 4% of inventors at companies were identified as women. The data also show that there is no single blockbuster category of patents in South Africa. Collectively, the top 15 categories only account for about 28% of all patents. This is in stark contrast to foreign patents, which are characterised by a single blockbuster category: A61K. Including pharmaceutical patents, this category deals with patents for medical, dental or toilet purposes and accounts for more than 17% of all foreign patents. While 6,131 patents for the A61K category were granted to foreign entities over the 10-year period, only 91 patents were granted to South African individuals and entities. Just over a third of the South African inventions in the data set have been patented in jurisdictions abroad.

The authors of the report submit that while the cost of securing and maintaining patent protection abroad is likely a factor for not seeking patent protection outside of South Africa, so too is the quality of patents granted in SA without examination. The authors conclude that the majority of patents being granted to South Africans may not be valuable in other countries, and if these patents are not valuable outside SA, it is more than likely that they are also not valuable within the country. Against this backdrop, it becomes difficult, according to Rens and Berger, to defend the status quo of non-examination on the basis that our current system is needed to create incentives for local innovation, especially because it limits access to the products of global innovation, such as medicines and other essential products. And since the highest quality patents seem to emanate from publicly-funded research, the data strongly suggests that the primary driver of high-quality domestic innovation is the availability of public funding for research and development, and not the continuation of a lax IP regime.