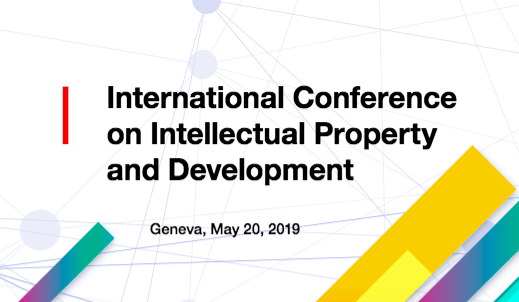 On 20 May 2019, the second International Conference on Intellectual Property (IP) and Development was held at the World Intellectual Property Organization (WIPO) in Geneva, Switzerland. A diverse crowd from industry, academia, international organisations, non-governmental organisations and students attended the event and some participated via the webcast. The panels, comprising of experts, discussed various topics in relation to IP and development. Discussion in the panels are summarised below.

How the IP System Benefits Innovation

The first panel, made up of Dr. Fernanda de Negri, Professor Marzenna Weresa and Professor Dominique Foray, discussed how the IP system benefits innovation. Dr. Negri spoke about some factors and conditions for innovation, and gave a historical perspective, and the empirical literature on IP and innovation that highlighted the important of patents for pharmaceutical and chemical innovations. According to Dr. Negri patent systems have an important and a positive influence on innovation in home countries. She stated that IP rights had positive effects on innovation in developed countries but the results for developing countries were not so clear. On the other hand, according to her, innovation required a broad sector of conditions, for example qualified people to innovate, infrastructure and good economic environment.

Professor Weresa then presented on the economics of innovation and shared some perspectives on the digital revolution and on invention in this area in Europe. She highlighted the dynamics of different fields of technology and how they are related to the fourth Industrial Revolution. Her presentation showed that the majority of technologies related to the fourth Industrial Revolution were developed in US, Europe and Japan. Following on her presentation, Professor Foray discussed the economics of innovation. He stated that big data and artificial intelligence (AI) presented a significant challenge for development and productivity growth would not only come from the vertical improvements of AI, but from all its propagations. As a result, argued Professor Foray, AI and big data will have applications in many sectors, such as healthcare, transport, R&D and marketing. The consequence of this is that IP rights will have to be balanced between incentives to innovate and disseminate.

How the IP System Benefits Creativity

The second panel, comprising of Mr. Aziz Dieng, Professor Ruth Towse, Professor Vanus James, focused on how the IP system benefits creativity. The discussion began with Mr. Dieng who spoke about the experiences in West Africa. He illustrated how the lack of respect for IP can have an impact on development of cultural products where distributors are afraid of investing fearing the security of their investments. Professor Towse then highlighted the importance of institutions in exercising and enforcing IP rights. She stated that copyright enables artists to deal in the market with the users and as new technologies develop there is an increasing number of rights that apply in different media with different results and different economic value in the various markets in which they operate. Digital works and technologies allowed individuals to exercise their rights themselves online and not through Collective Management Organisations.

An illustration of the role of IP in development was given by Professor James who spoke of how a small country could compete globally using its culture, creative talents and local knowledge. According to him, copyright in that context did not come with the barriers of scale and IP generally will play an important role in the competitive practice because once one had the IP rights, creators had a significant chance of converting their creations into income. He opined that the copyright-based industries had grown significantly in the Caribbean to contribute about 5% of GDP. On the social side the low cost of entry into the creative industries, particularly copyright, had provided an avenue for economic as well as social progress for many persons who come from communities that have traditionally been asset dispossessed.

On the panel on how the IP system benefits global issues there were four speakers, Professor Peter Yu, Professor Caroline Ncube, Professor Suerie Moon and Professor Xavier Seuba. Professor Yu’s discussion focused on the different factors that help to determine whether IP was necessary for development. According to him, there were two primary preconditions; one was that there had to be imitative capacity and two a sufficiently large market. It was, therefore, important to figure out how to customize the IP system based on the local conditions. For many developing countries the concern is that the standards do not fare well with the local conditions and the one size fits all approach took away the autonomy and policy space for many developing countries. He proposed the following ways to realign the IP negotiations: enhance flexibilities within the IP system; advance pro-development proposals especially at the international level; mutual supportiveness with other international agreements; ensure a transparent process; introduce complementary measures; allow countries to undertake selective adaptation.

Professor Ncube spoke on how to think about IP in the context of trade and regional initiatives. According to her, regional initiatives ought to be customizable to the local context at all stages. It was important to bring a human rights framework to think carefully about how to collaborate or to nuance IP provisions, have ethical considerations in mind and recognise the diverse innovative systems found in a particular region. IP provisions in the regional agreements ought to be flexible, usable and customizable in the local contexts. She stated that there is need to leverage on policy space that already exists and open new pathways for thinking and coming up with solutions. IP should and ought to benefit innovation by incentivising and rewarding innovative solutions that address global challenges and should support further innovation by making sure that the cost of access are kept to reasonable levels, or to facilitate access, dissemination and the transfer of technologies. She added that innovation supportive IP provisions ought to be pro-development, context appropriate, principles-based and need to leverage flexibilities and go beyond standard approaches.

A presentation on the relationship between IP, public health and access to medicine by Professor Moon followed. She introduced new business models that had been implemented and drew some conclusions on how to ensure that medicines remain affordable to all countries. She indicated that there had been a lot of thinking about organising R&D differently to ensure both innovation and access to medicines as access to medicines was increasingly a global issue, meaning not only one for developing countries, but also for high-income countries. She stated that we could think about other ways to jointly achieve innovation and access and not necessarily have to trade-off one for the other, for instance by understanding the rewards for innovation separately from the price per patient, a principle often known as de-linkage. De-linkage is where the reward for the innovation is thought of and implemented separately from the price. In addition, the use of flexibilities allowed the IP system to remain relevant and there was growing willingness to use the flexibilities as an important part of IP laws everywhere.

In conclusion, Professor Seuba spoke about IP enforcement. He emphasised balance in the context of global health and food security. Enforcement plays a crucial role and the relationship between enforcement and substantive norms had been expressed sometimes in political terms. Enforcement as a process entails principles of equity and proportionality. Some courts had distinguished between the creation of a right and the affordability of the remedies for the protection of that right. This kind of separation meant that there was space to adjust enforcement depending on a variety of factors, including policy goals and national situations.