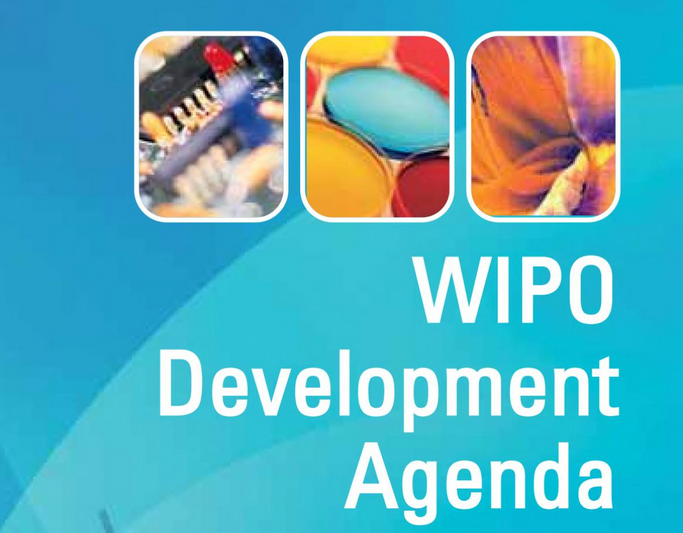 The Development Agenda (DA) is a pro-development reform of the international intellectual property (IP) system. It was initiated by a joint proposal by Argentina and Brazil at the 15th Extraordinary session of the World Intellectual Property Organisation (WIPO) General Assembly in 2004. The proposal, which called for a development dimension to IP, led to a negotiation process that spanned three years, from 2005 to 2007. The process included submission of over a hundred proposals, and deliberations in the Inter-sessional Intergovernmental Meeting, and the Provisional Committee on Proposals Related to a WIPO Development Agenda (PCDA). Different stakeholders, including government, academia, industry and civil society, participated in the negotiations, and in October 2007 the DA was finally adopted. Broadly speaking, the DA brings reform in two aspects: recalibrating the IP system to bring a balance; and reforming WIPO and making development central in its activities.

The DA contains forty-five recommendations divided into six clusters. Cluster A relates to technical assistance and capacity building requiring that WIPO’s technical assistance be development-oriented, demand-driven and transparent. The second cluster, B, aims to ensure that WIPO’s role in IP rule making leads to outcomes that are balanced and inclusive, providing that norm-setting activities be inclusive, member state driven and supportive of the development objectives as encapsulated within the UN system. Recommendations in Cluster C focus on the dissemination of information and technology, listing several ways in which technology transfer can occur, for example, collaboration among research and scientific institutions in developed countries to work with those in developing countries.

The fourth cluster, D, focuses on assessments and evaluations of WIPO and its activities and strengthens WIPO’s capacity to perform objective assessment of the impact of its activities on development. It also provides for impact studies on the economic, social and cultural impact of the use of the IP system in countries and studies on the protection of IP to identify possible links and impacts between IP and development. Even though a number of recommendations in all the clusters address WIPO activities, cluster E specifically deals with the mandate and governance of the organisation and its interaction with other intergovernmental organisations (IGOs) and nongovernmental organisations (NGOs). Finally, cluster F contains just one recommendation, which states that WIPO’s approach to IP enforcement must be ‘in the context of broader societal interests’, incorporating the language of Article 7 of the TRIPS Agreement.

What does it mean?

The adoption of the DA fits in the so-called calibration phase–a phase in global IP policy making where protection is adjusted to suite the appropriate context. By recognising countries’ different development levels, the DA represents a paradigm shift towards IP harmonisation. The DA is fundamentally aimed at assisting developing and least developed countries as the recommendations address the challenges that relate to them in IP related issues. It constitutes a rethinking of IP, not as an end in itself but a means to an end.

However, the establishment of the DA is one step, and what is key in delivering tangible results is the manner in which it is implemented. Upon the adoption of the DA, the Committee on Development and Intellectual Property (CDIP) was established and mandated to oversee its implementation. The implementation of the DA is carried out through projects and activities that the CDIP approves. Nineteen recommendations were identified for immediate implementation and over the years, the CDIP has approved different projects and activities that respond to the different recommendations.

Among the criticisms levelled at WIPO, is that as a specialised UN agency, it has not been fully guided by the broader development goals of the UN. Its role is not advancing IP protection per se, but promoting development through the appropriate use of the IP system. The projects that have been adopted by the CDIP have sought to address different IP and IP-related issues in developing and least developed countries to facilitate socio-economic development. These have included projects to improve national and regional institutional capacity, understand the interface between IP and competition policies, IP and technology transfer and IP and the public domain. However, the process is complex, not only because of the different needs of the countries but by the lack of a common understanding of what development means in the context of IP.

Historically, WIPO has been a central driver for strong IP protection. Thus, the challenge is that its expertise may not be well-suited towards achieving goals of the DA. This can be noted in some of the assistance that WIPO has given to developing countries in establishing IP policies and strategies, as well as WIPO’s technical assistance regarding the TRIPS Agreement over the last decades. WIPO’s technical and legal assistance activities have been criticised for unduly influencing developing countries and being overly fixated on the perceived benefits of IP rather than the costs. Its activities intended to develop institutional capacity have not sufficiently enabled developing countries to tailor their IP laws in line with their development needs. It is difficult to conceive that an organisation can take such a shift from a harmonisation to a nuanced approach to IP, with more or less the same expertise within WIPO.

Another crucial aspect contained in the clusters relates to the Intergovernmental Committee on Intellectual Property and Genetic Resources, Traditional Knowledge and Folklore (IGC). Recommendation 18 urges the IGC to accelerate the process on the protection of genetic resources, traditional knowledge and folklore and the development of an international agreement or agreements. Traditional knowledge remains an area of particular interest to developing countries and at the IGC there are a number of issues up for discussion. Though negotiations have been ongoing for a while there is still no agreement finalised yet. At the last session of the IGC however, a draft text on genetic resources and traditional knowledge associated with genetic resources was produced for submission to the WIPO General Assembly in September 2019.

It has been over ten years since the adoption of the DA. As a non-binding document, the DA is essentially soft law but it has facilitated a rethinking of IP. It has ignited a necessary shift in the recalibration and appropriate use of the IP system. The next part in this series will discuss what the DA has meant for African regional IP organisations, i.e. the African Regional Intellectual Property Organization (ARIPO) and Organisation Africaine de la Propriété Intellectuelle (OAPI).