Last month, the South African Research Chair in Intellectual Property, Innovation and Development (the IP Chair) hosted the official book launch for Dr Chijioke Okorie’s new book, Multi-sided Music Platforms and the Law, at UCT’s Faculty of Law. The event consisted of a “fireside chat” between Dr. Okorie and Adam Haupt, a professor of Film and Media Studies at UCT. Clarence Lakpini, a PhD Candidate under the IP Chair and a Research Assistant at the IP Unit was in attendance. Below, he reports on what happened that day:

“Phenomenal.” The word that jumped out to the audience when Professor Caroline Ncube, the holder of the South African Research Chair in IP, Innovation and Development, after her characteristically warm welcome to all the attendees, commenced her description of Dr Chijioke Ifeoma Okorie. It was clear to see that this was not just a word thrown out for the sake of it, but a heartfelt endorsement of a person the distinguished Professor considers a protégée. Having supervised Chijioke’s doctoral thesis, she is in a better position than most to give a candid opinion on the author. After all, Chijioke commenced her PhD studies, with her in 2015 and in her words, “finished in record time…”

The event, which was scheduled to mark the launch of Chijioke’s book, was held on the 12th of February 2020 and well attended from within and without the University of Cape Town’s Faculty of Law. Taking a conversational tone, the central event was the discourse between the author and Professor Haupt of the Centre of Film and Media Studies at the University of Cape Town, who steered a riveting and engaging conversation with his typically well thought-out questions. The conversation lasted for approximately 30 minutes, and was followed by a short Q&A session between Chijioke and the audience. It will be impracticable to turn this post into a transcript of everything that was said. However, some key points which were highlighted therein will be summarized in subsequent paragraphs.

The first question which Prof Haupt asked Chijioke was how she came about with the topic of her research? She first gave a brief history of her connection to the music industry in Nigeria, having worked in that space before commencing her PhD. She went on to say that what really got her down this research path was the fact that at the time streaming services such as Spotify, were just beginning to sprout up. She found it fascinating that their business model was one predicated upon the idea of “fighting free with free.” Even with the free service on offer by streaming sites, there was still a money trail which she was intent on tracing. Of particular interest to her were who was making the money; and whether the creators of the music knew about and had access to the money being made.

Another interesting issue which stemmed from their conversation was how privacy plays a role on the part of the rights holders who feel entitled to know what the streaming sites do with their content; vis-à-vis the users who expect some level of privacy on these sites- from a Nigerian and South African perspective. Chijioke stated that the privacy laws of both countries are still in their infancy. She further noted that in practice, there is a symbiotic relationship between the artists and streaming services, with artists viewing streaming services as avenues for self-promotion. To that end, she gave an example of a Nigerian music platform (Notjustok.com), which over the years has built a reputation of being well listened to by music lovers all over the continent, and how artists crave to upload their music onto the site because of the platform and exposure it gives them. 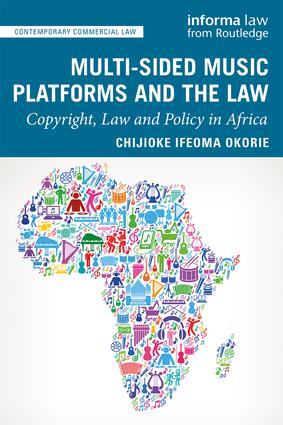 When asked by Prof Haupt about her thoughts on the debates surrounding fair use and fair dealing as it relates to South African and Nigerian copyright law, she spoke about how historically the challenge has always been balancing the rights of copyright holders with those of the users. She referred to an opinion which she wrote on the issue, where she stated that whether South Africa adopts a fair use or fair dealing provision, may not be the real issue. Her reasoning was that in both cases, it is only a court that can determine whether a particular use/dealing is fair. She pointed to the fact that in South Africa, there is only one case which deals with the issue of fair dealing (the Moneyweb case).

One of the questions asked was whether the author felt that collecting societies were beginning to lose their relevance with the rise in prominence of these streaming platforms. She answered by stating that if collecting societies are able to get their ducks in a row, there is still great potential for what they can achieve in protecting rights holders. She also pointed out that the current Copyright Amendment Bill in South Africa contains some proposed amendments which will allow collecting societies to operate more efficiently and in a transparent manner.

In sum, the event was a very interesting and engaging one, with many more talking points than have been summarised here. After the conversation and the question and answer session, Prof Caroline brought the formal event to a close, allowing members of the audience to proceed to ask Chijioke questions one on one. There were also some lovely refreshments which we all enjoyed and an opportunity to have informal chats with other attendees. In the end, the event lived up to its billing and I for one am glad I was there.